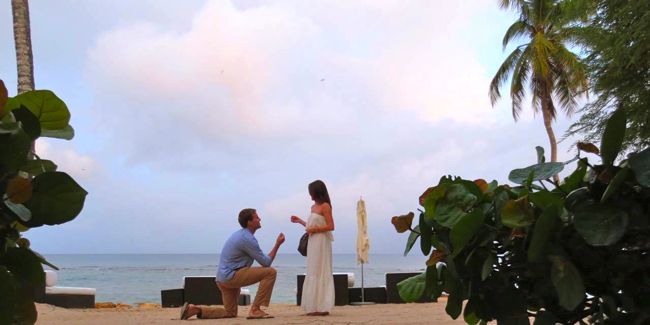 When Emily Zammit and John Jacobs, were planning their trip to Casa de Campo to help out with the Fundación MIR Family Weekend for Life event, Emily had no idea that John was secretly planning to surprise her – with an engagement ring!

Having arrived on Thursday evening August the 9th 2012, Emily and John enjoyed a blissful few days in Casa de Campo, relaxing, having fun and helping out at the Fundación MIR Family Weekend for Life with their good friend Ana Alba, who works for the Foundation. On Sunday however, Emily was treated to the shock of her life, as John successfully executed a romantic, complicated and well planned proposal on Minitas Beach, which involved a photographer hidden in the bushes and the surprise appearance of both Emily’s and John’s parents!

Congratulations to Emily and John!

Everyone (especially me) loves a good love story, so here in a interview with the happy couple, we bring you all the cute lovey-dovey details!

@cdcliving: Where did you meet?

Emily: I grew up in West Palm Beach, Florida. I moved to Washington, DC after college for work and currently still reside in the city. John and I were introduced by one of my best friends, Beth, and her boyfriend, Lawson (who happens to be John’s cousin). She went to the beach one weekend with Lawson’s family and met John there. She decided we just had to meet and arranged a dinner in DC the following week. After a year we finally went out on a date and it turns out she was right!

John: I was introduced to Emily by my cousin Lawson and his girlfriend Beth. We all went to dinner together in Georgetown, Washington DC, where things didn’t exactly go as planned! Emily had just gotten out of a long term relationship and wasn’t looking to date. She even tried to set me up with her cousin. However, after keeping in touch for almost a year, I was able to convince her to go on a date with me. After a night of great conversation, love started to blossom and we never looked back!

@cdcliving: Where did the proposal take place?

John: I proposed to Emily on Playa Minitas in front of the cabanas. I couldn’t have asked for a better location!

@cdcliving: Tell us about the proposal!

Emily: I was in total shock! I absolutely did not see it coming. Poor John had to stay on one knee for a while.

On Sunday we were all pretty tired from the event and Ani suggested we have a low key dinner on the beach around 6:30pm. At around 6pm it began to pour – it hadn’t rained the whole time we were there. I kept trying to cancel the dinner, but John and Ani kept pushing for it and moving back the reservations. (Now I know why). The sun came out around 7 and the reservations were changed to 7:30. As we were getting ready to head over, Ani faked a call to herself claiming that her boss needed her for 10 min to meet a potential client. She said she would drop us off at the bar by the beach and meet us there before dinner. (She really went to go pick up my parents and John’s parents at the hotel!)

John and I were at the bar having a cocktail when he mentioned that Ani had told him about cabañas we could rent the next day and he wanted to check them out. I kept saying we should wait for Ani but he finally convinced me. Since it had rained there was no one on the beach and it had cooled significantly so it was an absolutely beautiful evening. Once we made it to the cabanas, he wanted to take a picture of us. John took one picture – looked at it and said it was too far away and to come closer. The second picture I was smiling at the camera when he came over and got down on one knee…I honestly had no idea what he said I was just staring at him. He told me later he said, “I love you. I want to spend the rest of my life with you. Will you marry me?”

Surprise! John down on one knee at Minitas Beach

I was in total shock and absolutely did not see it coming. I kept asking him questions like did my dad know, was the ring real, was he sure etc. He asked me again to marry him and of course I said yes! We were hugging and crying when I looked over his shoulder I noticed a photographer snapping away! He had been hiding the whole time and snapped pictures of the entire proposal.

After a few minutes we walked back over to the restaurant and as we came around the corner my parents, his parents and Ani were all there with champagne! That is when I really lost it – I could not stop crying. It was so wonderful to have them there. I learned later that they had been in Casa de Campo for two days and had been dodging me the entire time! I still cannot believe it happened – every time I look at the ring I start smiling. We spent the rest of the time in Casa de Campo with our families. It was perfect!

On the night of the proposal, a thunderstorm blew through Casa de Campo pushing our plans back about an hour. I was extremely nervous that the storm wouldn’t stop in time. Nevertheless, the skies cleared and the scene on the beach was as beautiful and intimate as I could have ever asked for. Ana dropped Emily and I off at the restaurant under the guise that she had to run an errand for work. She was really going to pick up our parents from the hotel.

When we arrived at Le Cirque we went to the bar for a drink. I knew I wanted to get Emily on the beach some how, but the wet sand was holding her back a little. With a little convincing, I was able to get her to take a walk to the cabañas. Drinks in hand, we walked on the wet sand as the sun peaked through the clouds. After some small talk, I suggested we take a picture. With the self timer on the camera, we took a picture. I ran to “evaluate” the photo, but it wasn’t to my satisfaction. I suggested we take on more. After clumsily setting the camera up for another shot, I ran back to Emily’s side where I immediately dropped to my knee blurting out some combination of “I love you, I want to spend the rest of my life with you, will you marry me?” I must have completely taken Emily off guard, because all she could respond with were the following questions:
-Did I ask her Dad?
-Does Ana know?
-Is that real? (pointing at the ring)

After explaining that I had indeed asked her father’s permission and that the ring was real, she said “yes!”

@cdcliving: After the proposal how and where did you celebrate?

Emily: After the proposal we had a beautiful dinner overlooking the ocean at the Beach Club by Le Cirque. It was a perfect way to end the evening.

John: After the proposal, we started back for the Le Cirque for dinner. As we walked back to the restaurant, she caught a glimpse of her mother. I quickly dismissed that it couldn’t be her mother, but as we got closer everyone at the table was revealed. She was so overcome with emotion that I think everyone started to cry. We celebrated with champagne and a wonderful dinner with beautiful views of the beach and water!

Celebrating at the Beach Club by Le Cirque

@cdcliving: How and why did you choose Minitas Beach in Casa de Campo for the proposal?

John: I knew Casa de Campo had a special place in Emily’s life, having heard many cherished memories from her childhood took place in the resort. The beach seemed like a perfect setting for our special moment. This was all made possible because of Emily’s friend, Ana helped me orchestrate everything.

@cdcliving: Was this your first time in Casa de Campo?

Emily: This was not my first time in Casa de Campo. I absolutely love going there and would tell John about it all the time.

John: This was my first trip to CDC and it was certainly a memorable one! I don’t know if I’ve ever had a better vacation! I was able to play golf, tennis, shoot skeet and enjoy the beautiful beach! All of this in addition to getting engaged to the love of my life meant for the best week of my life.

@cdcliving: Any plans to return to Casa de Campo?

Emily: We will definitely be coming back to Casa de Campo! Our parents were hinting it would be a great place to bring kids one day.

John: I plan on spending many anniversaries, family vacations and other celebrations in Casa de Campo!

@cdcliving: Would you describe Casa de Campo as a romantic place?

John: I think Casa de Campo is a very romantic place. The views at Altos de Chavon, Playa Minitas and the Marina Casa de Campo are very unique and beautiful.

Emily: We did attend the MIR fundraiser and had a wonderful time. The attention to detail was great. Also, the people at our table were delightful, the staff was attentive and the entertainment had everyone on the dance floor!  All that you need for an outstanding event!

We did visit one of the MIR schools and were very impressed. It is amazing what they have accomplished in such a short time. We especially loved the new kindergarten and first grade classrooms, as well as the new library. I also liked that the older students are learning skills that will help them obtain good jobs and a more financially secure future. Overall, the campus was peaceful and tree filled – a beautiful place to learn!

John: To be able to contribute to a foundation that is doing so much for the youth of the Dominican Republic was a very rewarding experience. The event was spectacular! We were able to tour one of the schools and I was very impressed with what the foundation has been able to do. I am very excited to see what progress MIR can make in the years to come!

@cdcliving: What else did you enjoy during your time in Casa de Campo?

Emily: Besides the MIR Fundraiser (which was an amazing party) and our engagement, we enjoyed the beach, skeet shooting, tennis, golf, sightseeing and the Casa de Campo spa. Ani even took us into La Romana for dinner at local restaurants. We enjoyed great food and fun conversations with her friends.

We all agreed that the people we met during our stay and the staff members who took care of us were some of the kindest people anywhere! We decided it must be a Dominican trait because we experienced it everywhere we went.

Golfing on the Teeth of the Dog