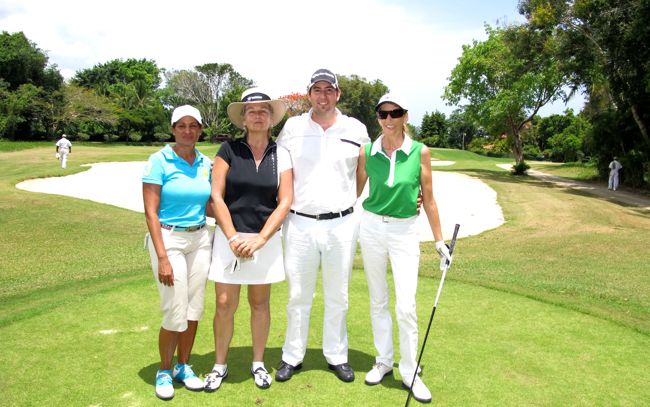 It was another blisteringly hot day on Saturday the 16th of June, when the 93 golfers of the 3rd Buen Samaritano golf tournament stepped out on Casa de Campo’s newly renovated Links golf course for a friendly yet competitive round of golf.

Playing in a “scramble” format in pairs, the philanthropic golfers enjoyed a fabulous afternoon in the sunshine – which although hot showcased the beautiful golf course at it’s best, with numerous beautiful Flamboyan trees with their fiery red and orange flowers lining the fairway.
[To read more about the majestic Flamboyan tree – click here]

Mery Ledesma tees off on Links – look at that gorgeous Flamboyan tree!

This 3rd annual golf tournament raised funds for the Buen Samaritano Foundation, who, since 1997 has provided health and education to many children and women in the La Romana area. Amongst the 93 golfers, all playing in support of this cause, we spoke to Richard Ainsworth, Financial Manager at the Tabacalera de Garcia (the largest hand-rolled cigar factory in the world, located just outside Casa de Campo), who explained his organisation’s motivation for taking part in the tournament:

“The Tabacalera de Garcia is an organisation that supports most of the charities in La Romana, it also supports the local schools by supplying educational equipment and paying for certain salaries. The Tabacalera de Garcia takes the view that every one should have a chance to succeed, and whilst we cannot help everyone personally we can contribute to the charities that do and can provide help. ”

Amongst the numerous local and national supporters of the tournament was ourselves, Silgon with our media; Casa de Campo Living and CasaLife, who were only too happy to support this great cause – with an online advertising campaign, which this year helped the tournament more than double in size – growing from 46 players last year, to 93 this year! A fact which must also have doubled the financial success of the event!

“We are immensely grateful for your help, we feel very privileged to have worked with you – you are an excellent media company.”

The “Buen Samaritano” Foundation and General Hospital is a non profit institution which, since 1997, thanks to doctors and volunteers from abroad, has developed a wonderful program to provide health and education to many children and women in the La Romana area.

CLICK HERE TO READ MORE ABOUT THE BUEN SAMARITANO HOSPITAL!