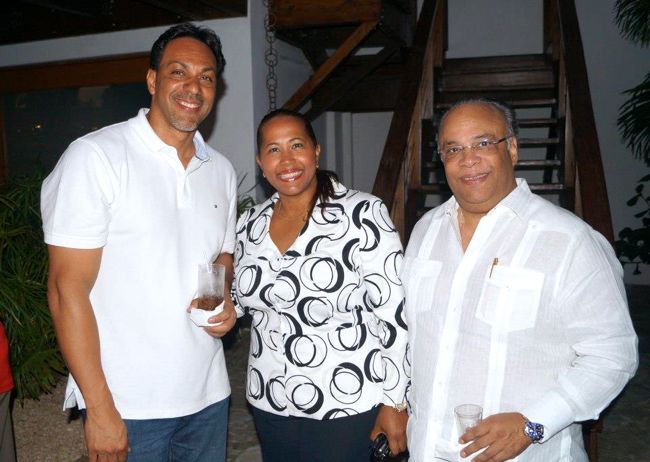 On Friday the 8th of February 2013, the celebrations surrounding the 4th annual Inductions to the Latino Baseball Hall of Fame were well underway – and following a packed day of activities – including the unveiling of statues at the Paseo de los Inmortales in La Romana, the INMORTALES of Latin Baseball were invited to relax and enjoy a cocktail with Casa de Campo’s managers, sports and facilities directors, as well as special members of the Casa de Campo community and VIP hotel guests.

Set around the central pool of the Casa de Campo hotel, guests were treated to a wonderful selection of drinks and picaderas – and the most sensational sunset, even though the sunset could not be seen, the beauty of Casa de Campo shone through as the sky lit up so brightly it glowed in the most beautiful shade of pink.

Having enjoyed a long “welcome” night the previous day – a cocktail at the Marina Casa de Campo and dinner in honor of Roberto Clemente on Minitas Beach – not all of the Latino Legends in Casa de Campo made it to the cocktail, but those that did had a great time talking to their fans and signing their autographs in the new magazine of the Latino Baseball Hall of Fame – INMORTALES.

Perhaps the biggest star of this occasion was Juan “Igor” Gonzalez from Puerto Rico, who in Casa de Campo for the first time was inducted into the 2013 class of the Latino Baseball Hall of Fame – and who, sporting his Texas Rangers uniform, was featured on the front cover of INMORTALES magazine.

Also enjoying the sunset and the company of their fans were class of 2013 inductees; Tony Fernandez, Octavio Rojas and Rennie Stennett, class of 2012 inductees; Tony Olivo, Luis Trite Arroyo, Bengamín Oglivie and Manny Trillo, as well as Luis Clemente representing his late father Roberto Clemente and Jeff Idelson, the President of the National Baseball Hall of Fame in Cooperstown.

And that’s not all! We were also very pleased to chink glasses with TV personality Sofia Lachapelle and her husband Francis Beltran, pitcher for the Baltimore Orioles.

For me it was the perfect continuation from the Café de la Leche hosted by Anna Maria Paniagua earlier that same evening, as well as a great warm-up for a wonderful night amongst the baseball stars – at Casa Grande at the Honorary Chairmans dinner hosted by Alfy Fanjul.

The following collection of photos were taken on Friday the 7th of February 2013 at the Casa de Campo hotel pool:

Honoring the INMORTALES at the 4th Inductions into the Latino Baseball Hall of Fame!

Click here for photos and coverage of the entire event!