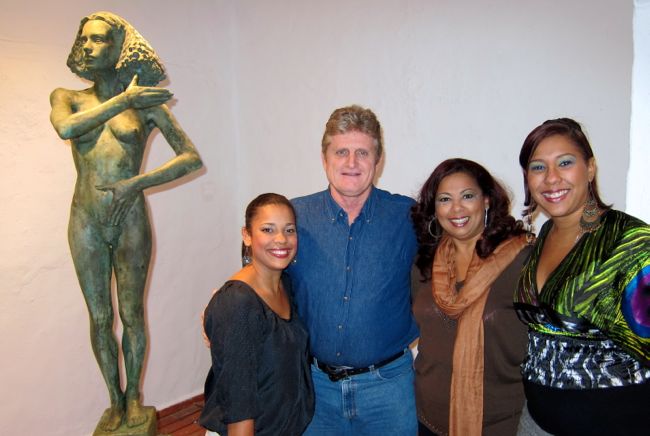 Last Thursday December the 2oth, artist Mark Lineweaver, who is also a teacher at the Altos de Chavón School of Art and Design celebrated the opening of his new exhibit “Flora y Fauna” at the Altos de Chavón art gallery amongst a very impressed crowd of Casa de Campo villa owners, residents and visitors as well as of course many enthusiasts from the art loving community of Altos de Chavón.

“Mark Lineweaver is a rarity” is something Stephen Kaplan, rector of the Altos de Chavón School of Art and Design has said to us ahead of the opening – and upon arrival there could be no doubt that this statement was true. The art exhibit presented by Mark is quiet simply astounding – provoking passionate responses from all in attendance, all night phrases of awe and praise echoed off of the gallery walls.

Perhaps the most striking piece (among many) is the sculpture “Cleopatra Last Trip”, which attracted quiet an audience – and perhaps even a buyer before the night was though! Other particularly popular pieces depicted the torso of when very well endowed man and an equally blessed female, as well as a unique bust in bright green, crafted to look like an apple core. It is easy to see why Mark is best known for his figurative work, and has been the recipient of several commissions – among them are a bust of magazine mogul Malcolm Forbes and several larger-than-life striding figures, commissioned by the architect Michael Graves, that animate the campus of Richard Stockton College, in Galloway, New Jersey.

As well as these sculptures, the paintings depicting Dominican nature were also greatly admired. The large canvasses, many of them diptychs, explode with plant life – branches, vines, and floral colors.

The art exhibit “Flora and Fauna” by Mark Lineweaver will remain open to the public until January 21st, 2012, on the 1st floor of the Altos de Chavón art gallery, open everyday from 8am to 5pm (except for Wednesdays).

The following collection of photos were taken during the opening for “Flora y Fauna” by Mark Lineweaver at the Altos de Chavón art gallery on Thursday December 20th:

On Saturday the 5th of January 2013, the Altos de Chavón art gallery will be celebrating the opening of a new art exhibit “Agua Conectando la Vida” (Waters Connecting Lives) with designs by Emilio Robba, Mayra Gonzalez and Lisa Ballentine.