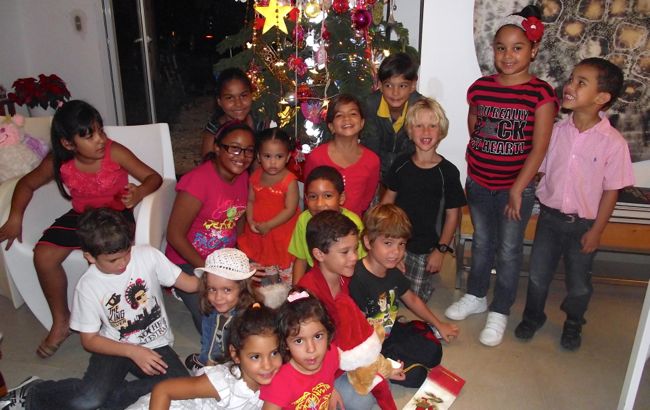 The first ever children’s “aguinaldo” was held this past Thursday December 6th, 2012 at the Altos de Chavón Regional Museum of Archaeology.  A group of children from the La Romana and Altos de Chavón communities got together to enjoy a day full of sweets, singing, partying and music, helping bring the holiday season into full gear.

The Dominican Aguinaldo, is one of the greatest traditions of the holiday season – when communities come together in the streets for a celebration which is both a festive party and a parade. In this instance, the children’s aguinaldo organized by the Altos de Chavón Regional Museum of Archaeology led the little ones on a fun route around Altos de Chavón where in each location they were treated to different activities as well a narration of the Christmas Story.

To color is to learn. The children were welcomed into the Exploration Hall in the museum where they were given a couple of nativity scenes to color and prepare for the “aguinaldo”. The first stop was a real treat, hosting the group was a friend and graduate of the School of Design, America Olivo, who graciously received the group with countless number of sweets, pies, desserts, soft drinks and ginger tea, that made the adults in the group feel extremely welcoming. Here the beginning of the Christmas story was narrated while the children had time to be proactive with “hands on” activities of drawing and placing the corresponding figures to each one of the scenes.

With each house comes a new story. The children stormed into the house spreading their happiness where new host Jackie Arevalo; also friend and former student of the School of Design, patiently awaited for them. They quietly sat around the Christmas tree while Jackie started the second part of the Christmas Story. Of course, the most exciting part was the children lining up to receive an extra dose of “sugar” to further fuel their joyfulness!

To Santas house we go. At the third stop – “Aunt” Martha Victoria’s house, the little ones were overcome with joy and holiday spirit – the house resembled a miniature Santa’s enchanted forest full of warmth and festive decorations! At Aunt Martha’s the children enjoyed a few more sweet drinks and the final episode of the Christmas Story – the birth of baby Jesus.

The Christmas Story with Aunt Martha

Last but not least, with the support of Aunt Ana Pereyra, the children were taken to the central plaza in Altos de Chavon, where they were able to enjoy the musical singing tree and play limbo from a rope that appeared out of thin air. With all these things going on, HO HO HO rung through the air and the final special guest appeared just in time to end the night: SANTA CLAUS! With his visit came lots of hugs, special gifts and an opportunity to take pictures with him.

What a magical night!