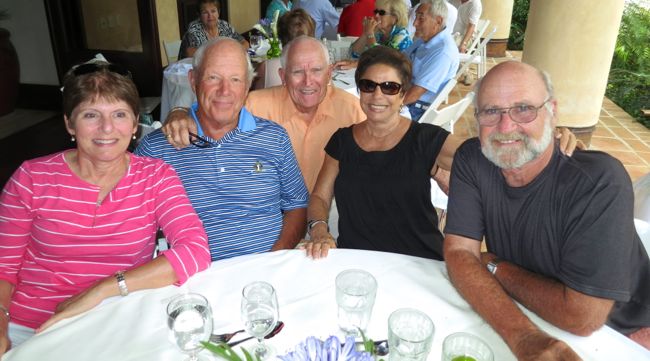 With the impressive and surprise victory of Francisco Concepción over reigning champion Pedro Nolasco watched by a crowd of more than 100 Casa de Campo villa owners and guests, followed by the announcement that this year the tournament raised a grand total of US$46,500 for the McDaniel Foundation – the 2013 Teaching Pro’s Tournament was a huge success! Which is why on a warm and sunny afternoon, Rick McDaniel founder and president of the tournament hosted a superb luncheon to thank all the many supporters and sponsors.

The McDaniel Teaching Pro’s Tournament, the main fundraising event for the Ball Boy’s Scholarship fund was this year able to raise a record-breaking US$46,500 – thanks to the generous contributions of 18 corporate sponsors, amongst them  Silgon Inc., Marketing, Web Development & Publishing Services, Wilson, Charles Schwab and the Hank Greer Foundation, as well as more than 50 individual sponsors from the Casa de Campo community, who each donated between US$300 and US$5,000 to the cause.

This incredible fundraising effort made it possible for the tournament to not only continue it’s Scholarship Scheme for more than 20 ball boys and girls, but also for the first time grant a college scholarship to Keury Alexander Herrera, who as a beneficiary of the Scholarship Scheme recently graduated successfully from school. The money raised will also be used to pay for new strings for the ball boys and players – as well as for weekly English classes.

And so the luncheon hosted by both Rick McDaniel and his wife, Cathy at their private Casa de Campo villa in the El Batey neighborhood of Casa de Campo, was a joyful occasion as the organisation committee; Rick McDaniel, Tom Wahl, Rebecca Hughes (me!), Emilio Vásquez, Lynn Robinson, Lou Gilmore, Stan Couldrey, Pablo Green and Adonis Siervodedios, as well as Phyllis Berney, this year’s honorary chairman, joined together with all the other sponsors to celebrate another successful tournament!

Congratulations and a big THANK YOU to all involved!

The following collection of photos were taken on Wednesday the 6th of March at the Sponsor’s Luncheon hosted by Rick McDaniel at his private Casa de Campo villa:

A surprise victory for Francisco Concepción in the 8th annual McDaniel Tennis Tournament!

On Sunday the 10th of March 2013, the 8th annual McDaniel Teaching Pros Tennis Tournament came to a very exciting close at the La Romana Country club – as Francisco Concepción and Pedro Nolsaco went head to head in the finals.

Following the thrill of a very closely fought match between 2 of Casa de Campo’s best tennis players – the ball boys, professionals, players, the tournament committee and guests enjoyed dinner and drinks on the lawn of the La Romana Country Club – where the prize-giving ceremony was also held.