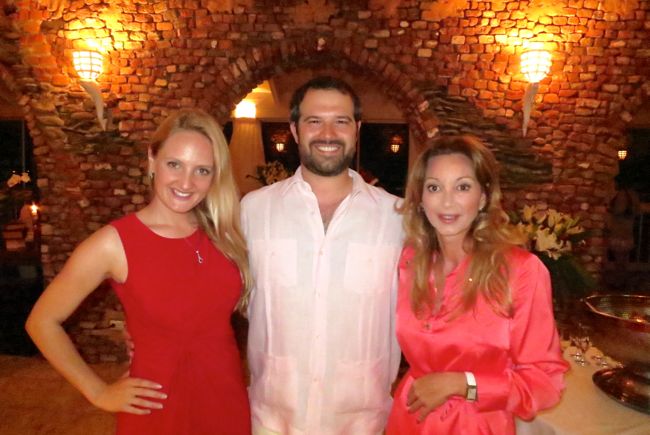 Last Friday the 26th of April 2013 CasaLife magazine hosted an exclusive cover party to celebrate the launch of the latest issue – as well as the official opening of The Club Riverside Steakhouse in Altos de Chavon, an occasion proudly sponsored by Chivas Regal 18.

While the invitations clearly stated the affair to be strictly from 7pm to 9pm, the enthusiasm of the hosts and the guests got the better of everyone and kept the soiree going ’till the early hours of the morning.

As the more than 100 guests arrived to the “Casa del Rio”, one of Altos de Chavon’s most beautiful spots, and new home to The Club, they posed for a photo in front of the latest CasaLife cover, and then made their grand entrance down the stone steps and into the party…

Once inside, the invitees exclaimed “¡ay que lindo!” (oh how lovely) as they were greeted by the chic interior of the restaurant with it’s modern decor in a simple white and red color scheme, which blended perfectly with the classic brick structure of the building. Those who arrived early enough were able to enjoy the stunning view of the Chavón river as it glistened at dusk, while they enjoyed their first drink of the evening; a Chivas Regal 18 on the rocks, a glass of champagne or a delicious red wine sangria.

As more and more guests started to arrive, The Club surprised all the guests with an extensive buffet dinner; finger foods and picaderas, kebabs and sausages fresh off the Argentinian-style grill, a wonderful selection of cheeses and even a delicious seafood paella. With so much food, there was no need to leave the gathering for dinner elsewhere… and so with plenty of drinks, great music and satisfied tummies the party continued long after we had expected to head home!

The food, the music, the drinks and of course the company combined to create the perfect ambience for Casa de Campo’s more mature crowd (the over 30’s that is) – as we chatted, laughed and danced the night away – some inside, and some enjoying the cool breezes on the veranda.

The Club Riverside Steakhouse intends to be not only a great restaurant – but also somewhere for the Casa de Campo community to relax with friends; a place to enjoy a night out with music and dancing. Coming soon they will be hosting various theme nights – such as karaoke, ladies night and more! Of course, we’ll be the first to let you know as soon as we hear anything!

Acting as the hosts for the evening were Pierluigi Tenconi and his wife Mita, owners of The Club Riverside Steakhouse in Altos de Chavon, as well as Philip Silvestri President of CasaLife and Rebecca Hughes, CasaLife’s social editor.

The following collection of photos were taken on Friday the 26th of April 2013 at The Club in Altos de Chavón: