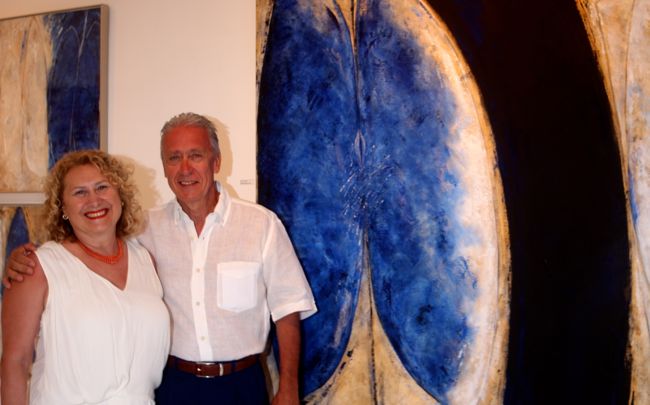 As many as 200 members of the Casa de Campo community, as well as visitors turned out to celebrate the opening of the new art space “Fernando Varela Espacio 7” located on the Calle Barlovento of the Marina Casa de Campo, as well the latest issue of CasaLife – 2 fine pieces of artwork even if we do say so ourselves! With an endless flow of champagne from El Catador and some delicious Caribbean nibbles the gathering ebbed and flowed from 6:30pm, with the last guests heading home as late as 9:30pm.

Included in the exhibition was a mixture of Varela’s most recent works featuring pieces from 2 collections; “Origenes y Formas Primarias”  and “Caribes”. Perhaps the most intricate creations belonged to the Caribbean series, which in addition to the principal images features intimate details of the human body, as well as silhouettes of each of the Caribbean islands, details which I personally had never noticed before – thank you to Ivonna Sosa for opening my eyes!

Ivonna Sosa pointing out some of the intricacies of “El Paraiso”

In attendance at the occasion was Fernando Varela himself, joined by his lovely wife Rosario and daughter and son Monica and Mateo, as well as Philip Silvestri, President of CasaLife Magazine and myself Rebecca Hughes, social editor of CasaLife magazine. Amongst the varied group of guests were Casa de Campo full-time residents, many visitors in Casa de Campo for a short break in August (lots of Italians!), some special guests from Santo Domingo such as Manuel and Raisa Tapia of family law firm Marat Legal, as well as Gianfranco Fini, commodore of the Casa de Campo Yacht Club, Jose Gonzalvo general director of the Marina Casa de Campo and Vilma Nuñez marketing manager of the Marina Casa de Campo.

Arriving a little later, but nevertheless suitable enthusiastic about the artworks was Dr. Claudio Silvestri, President of Casa de Campo and his wife Roswitha, who fell in love with a number of pieces in the collection – including “El Paraiso”, the striking purple piece belonging to the Caribbean collection, which was very popular amongst all the guests.

It was a truly fantastic evening.

The following collection of photos were taken during the summer cocktail with Fernando Varela and CasaLife on Thursday the 8th of August 2013:

As this summer marks the 100th anniversary of the Central Romana Corporation, of which Casa de Campo is part, in the most recent issue of CasaLife, we share with you an interview with Alfonso Fanjul, Chairman and Chief Executive Officer and J. Pepe Fanjul, Vice Chairman, Chief Operating Officer, and President, as a tribute to their company’s impressive history, achievements and vision for the future.