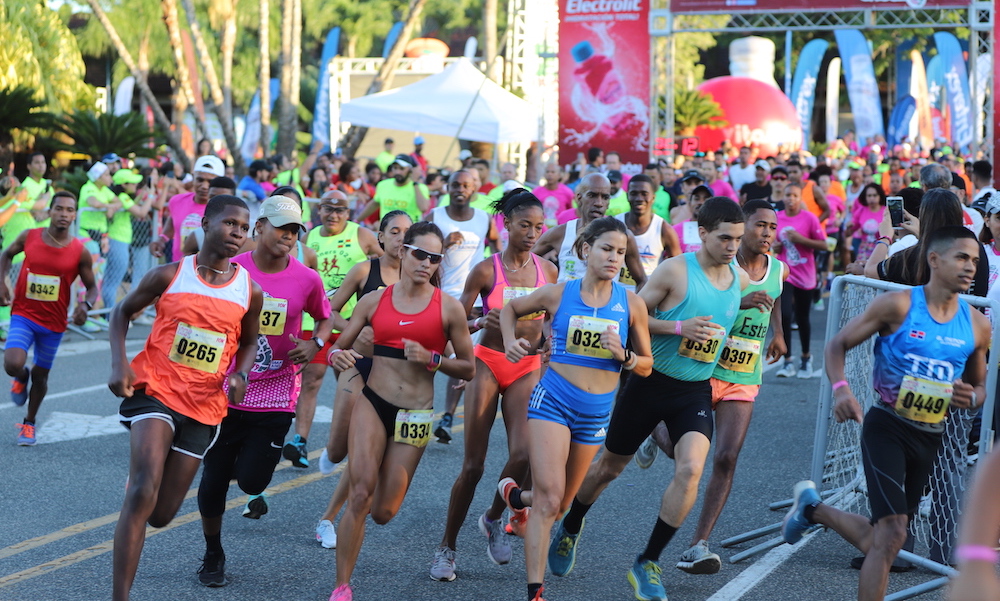 It was before the sun came out that runners in the 21k and 42k distances of the Casa de Campo Corre rose early and headed to the starting line of the race for the Hogar del Niño. The 6th consecutive year of the marathon drew the support of close to 1,000 runners on Sunday, October 20th who were enthusiastic to part on this great test of endurance and to show their support for the children of Hogar del Niño.

Brightly colored participants were dressed in not-to-be-missed pink sports shirts that were not only cool designs but excellent at wicking away the morning heat which of course came out in all its glory with the sun! Runners ready for the 10k and 5k routes had been thoroughly warmed up as several joined the long distance runners in Zumba lessons that started at 5:40am and again at 6:30am!

The event had the return of celebrity personalities Renata Soñé, and Gabriela Reginato. The pair were very entertaining on stage, creating an upbeat atmosphere that kept the runners motivated and spectators animated. Volunteers with the Hogar del Niño guided runners throughout the race, indicting the twists and turns of the routes that curved through the resort’s beautiful properties and landscaping. Whether participants were walking or jogging, they were cheered on by staff, given the number of kilometers remaining, and provided with water throughout the race. Many running teams were among the Casa de Campo residents and Hogar del Niño students participating, and we noted the running groups 026Runners, Lo Corredores, Run4GodRD, Los Carreteros, Culturafit RD and even big companies such as Costa Farms Nursery and Guzman Ariza Law had runners in attendance.

At the finish line, runners were greeted by cheering loved ones and supporters. They were handed a goodie bag of healthy snacks, water and Electrolit, and a bright shiny medal. Everyone agreed this was an awesome award— everybody felt like winners no matter the time! It didn’t take long for a celebration to be in full swing with music, local venders, and a raffle! Cinco was handing out their new Cincoletas, Higueral was serving up hotdogs to an incredibly long line, Café Santo Domingo was at the coffee stands, Vitasalud offered vitamin water and protein, and several more aided attendees with whatever they needed. A recovery stand was set up in case runners were feeling uneasy where therapists could be seen attending to those with leg cramps or sore muscles.

In the female category, first place for the 5k went to Idelcia Yolis, 1st place in the 10k Natasha Mendez, Jaisa Sanchez 1st place in the 21k, and Mical Esther Abreu Alvarez took home the prize for 1st place in the 42k.  A quick stride at 5:10 per kilometer enabled her to come in 7 minutes before her closest competitor! Find the complete list of winners and find your own personal time on www.timingco.net.

Exceeding all of the expectations we had from the 5th marathon which took place last November, this 6th Casa de Campo Corre edition for the Hogar del Niño was a huge success! And if a picture is worth a thousand words… how much is a gallery filled with action shots of our enthusiastic runners and supporters?! Take a look at just some of our pictures from the 6th annual Casa de Campo Corre for the Hogar del Niño marathon last Sunday, October 20th taken by Yafranny Melo – MORE TO COME SOON: