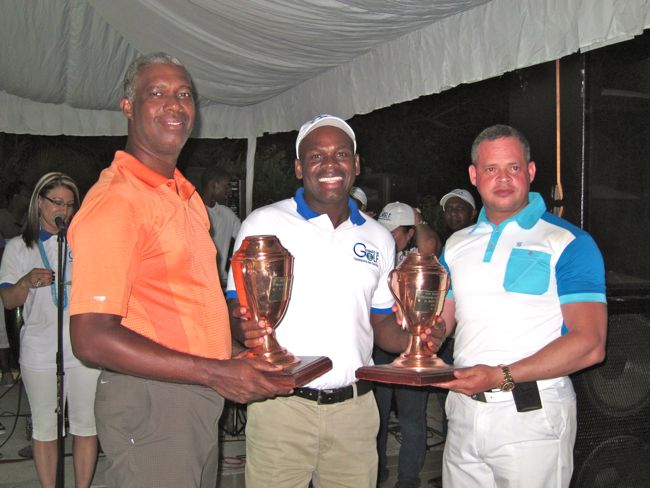 Despite the clouds that threatened to spoil last Saturday’s wonderful afternoon-evening celebration, the participants of the Buen Samaritano Golf Tournament, who had just played a fun and challenging golf tournament in teams of two on the “Links” golf course in Casa de Campo, gathered at the “Caza y Pesca Club” in La Romana with much enthusiasm, where they enjoyed drinks, food, live music, raffles – with some cheeky players joking about being the winners (as seen in the photo on the right), while they awaited for the official prize-giving ceremony!

CLICK HERE FOR PHOTOS TAKEN ON THE GOLF COURSE!

The event was conducted by popular members of the La Romana community, Hilda Peguero and Marcial (Callito) Morla, who gave the welcome address. The evening progressed with numerous raffles, when players won many prizes donated by the event’s numerous sponsors such as; golf clubs, golf gloves, bank accounts, vacations, among others and then there was a lot of dancing – thanks to the wonderful rythms of live merengue music played by popular christian band, “Maranata”.

The guests also enjoyed a buffet-style dinner with a variety of traditional Dominican food, as well as a video of the many people who have been helped by the Buen Samaritano Foundation – who gave their heartfelt thanks to those who support the cause.

Enjoying the party – to the rythms of Dominican Maranata band!

Under the scarce stars in the cloudy skies, the awaited moment had finally arrived; three teams were crowned winners of the 3rd annual Buen Samaritano Golf Tournament, receiving specially designed trophies by famous La Romana artist, José Ignacio “El Artístico”, given out by Moisés Sifren, Director of the Buen Samaritano Hospital, along with Doctors Bidó and Adriana Núñez, who thanked the particpants for taking part in the event.

Below we share the winners of the 3rd annual Buen Samaritano Golf Tournament:

Congratulations to all! Thank you for supporting this great cause that has helped today more than 593 people with scarce resources who suffer from malnutrition, aids and other serious medical conditions.

“With each golf club, with each golf ball, we are contributing to the health of a person” — Hilda Peguero, Mistress of Ceremonies

Below is a selection of photos taken during the 3rd Buen Samaritano Golf Tournament prize-giving ceremony at the Caza y Pesca Club in La Romana, last Saturday June 16th 2012:

The “Buen Samaritano” Foundation and General Hospital is a non profit institution which, since 1997, thanks to doctors and volunteers from abroad, has developed a wonderful program to provide health and education to many children and women in the La Romana area.

CLICK HERE TO READ MORE ABOUT THE BUEN SAMARITANO HOSPITAL!