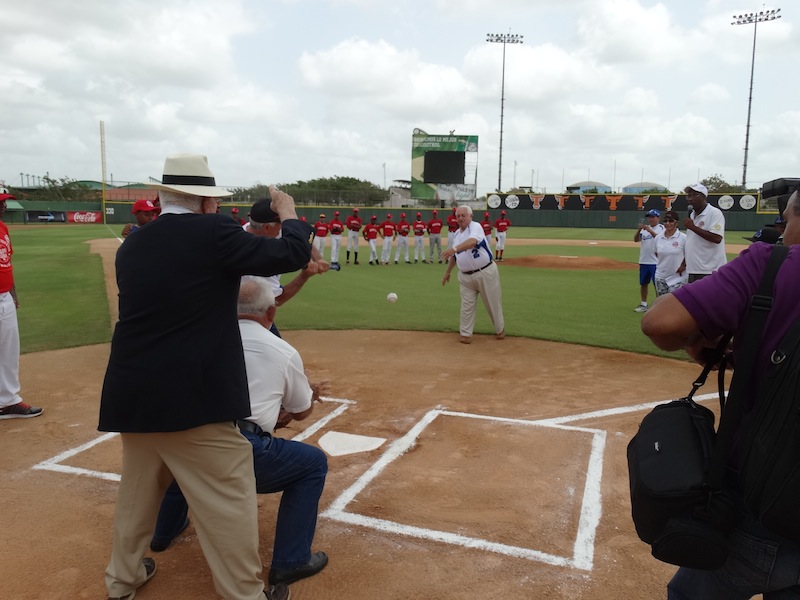 The Casa de Campo Hotel was the stage for the launch the latest project of the Latino Baseball Hall of Fame (LBHOF), the 1st Youth Classic LBHOF Cup, which has the support of the Major League Baseball luminaries Mr. Tom Lasorda, Bobby Valentine and Octavio “Cookie” Rojas, who traveled from the US to Casa de Campo to be welcomed by Roberto Weill, Founder and President of the LBHOF, at a cocktail on Friday June 12th.

This cocktail also received the Little League team from US, Blue Elite, which is one of the teams competing against other minor league teams in the country for the championship of the 1st Youth Classic LBHOF Cup.

Mr. Roberto Weill welcomed and thanked all those present and emphasized the importance of this project designed to develop the talent of the future stars of US and Dominican baseball with the support and advice of great baseball legends. Mr. Calixto Garcia Velez, on behalf of the Casa de Campo resort, took the opportunity to express the interests of the resort to promote sports activities within the complex.

After a warm reception on Friday evening, the 1st Youth Classic LBHOF Cup, was launched with an opening ceremony on Sunday June 14th, at the Francisco A. Micheli Stadium in La Romana, where Mr. Tom Lasorda, member of Cooperstown and Latino Baseball Hall of Fame, threw the first ball alongside the aforementioned luminaries and Armando Benitez, former MLB baseball player from the Dominican Republic.

Following the opening ceremony, the first match between the teams of the League Elite Blue from Los Angeles, California, and the official Dominican Republic Little League team, which finished with a win for the Blue Elite team on an emotional game played in extra innings with a score of 5-4.

The remaining games of this Youth Baseball Classic will be held TODAY, Monday, June 15th, and the finals will be played on Wednesday, June 17th. All the games will be held at the Francisco A. Micheli Stadium in La Romana and they’re totally FREE, which means everyone is invited to come support young local and foreign talents (see the game calendar below).

The following photos were taken during the welcome cocktail and the first match of the 1st Youth Classic LBHOF Cup: