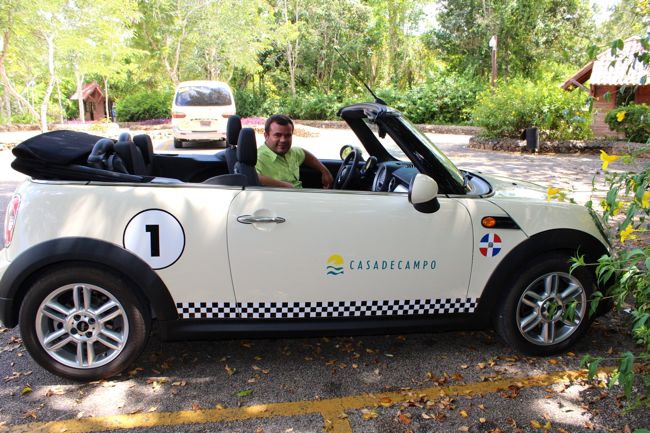 On Monday July 15th, DoMINItours, the company that organizes tours for tourists from Punta Cana in MINI Coopers, were spotted visiting Altos de Chavón with a Russian family – only the second tour since this excursion was launched.

Matias Mut, the project manager, along with two mechanics accompanied the tourists who were driving 2 MINI Coopers; one a cream color and the other red.

Mut, who is Uruguayan and has been based seven years in the Dominican Republic working in the tourism industry, said that the MINI Cooper tours had gotten off to a wonderful start.

Mut told us that on Thursday July 11th, a group of local tour operators took part in a MINI Cooper tour ​​from Punta Cana to Altos de Chavón, following which they had already received a number of reservations.

During their visit to Altos de Chavón, Mut leads the tourists on a guided tour, explaining the history, pointing out places of interest in the area, as well as allowing visitors free time to explore themselves. It is no surprise that each visitor leaves impressed by the architecture of Altos de Chavón and its peculiar history.

Matías Mut’s vision to create this tour was inspired by similar excursions he had seen in other countries, who sell tours in luxury vehicles, such as Ferraris.

Unfortunately, Ferraris are not ideally suited to driving around in the Dominican Republic, so Mut decided to choose MINI Coopers – which are very popular in this country, while also having a history dating back to the 1950’s – although of course the company are using the latest convertible.

“MINI Coopers call attention wherever you go and even more so to tourists – especially to Russians, because the weather in their country, is not conducive to driving convertibles,” he said.

DoMINItours offers tourists a different option for getting to know the Dominican Republic  – tours in MINI Coopers from Punta Cana to Santo Domingo, stopping at places of interest along the way, including Altos de Chavón in Casa de Campo.

Currently the tour route goes from Punta Cana to Altos de Chavón and visits Boca de Yuma, La Flor Dominican cigar factory tour and megastore and Altos de Chavón, later this year when the new road to Santo Domingo is completed, another tour option all the way to Santo Domingo will be added to include stops as the Cueva de las Maravillas cave, the Colonial Zone and the Malecon in Santo Domingo, among others.