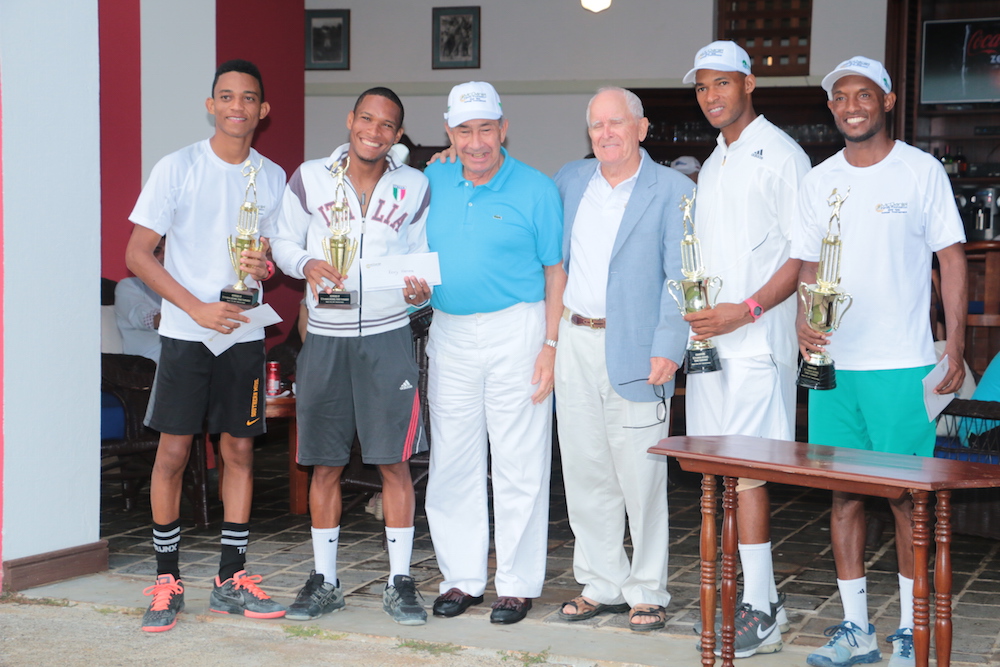 The Casa de Campo tennis community came together in fine style last Sunday, the 12th of March, to enjoy one of the best matches ever played here. The 12th Annual McDaniel Tennis Tournament, which started on Thursday, March 9th celebrated its final round at the LRCC before a huge and enthusiastic crowd of supporters and friends.

The McDaniel Family Foundation, this year celebrating its 12th anniversary, has sought to sponsor the education of Casa de Campo’s ball boys, and through their annual fundraising tournament have year after year succeeded in assisting a growing number of boys (and even a few girls). The doubles format, with a pre-arranged draw that included 20 players from La Terraza and La Romana country Club, was well received by players and spectators and provided more opportunities to catch exciting games on the courts. Sports fans sat with a perfect view on the sideline of the main court, wherein during the final competition a fierce battle took place. Francisco Concepción and Juan Carlos Cordero stood out, and earned this year’s championship tournament.

The awards ceremony followed the tournament, gathering the sponsors, players, ball boys, and their families at the La Romana Country Club. Rick McDaniel thanked everyone once again for their continued support throughout the years and shared with everybody that the foundation will be able to continue providing Player’s Health Insurance, all the Ball Boy’s Scholarships, the Player’s Prize Money, and two College Scholarships!

Later on, Mr. McDaniel presented David Gober, this year’s honorary chairman with a plaque thanking him for all his help and loyal support. He talked about the English classes that are given to the players every week, and two of the players did a small skit as a demonstration of what they have learned. He also invited a former player, Andy Javier Mercedes Sánchez who had been one of the beneficiaries of the college scholarship and who had recently contacted him letting him know that the McDaniel Family Foundation didn’t need to continue paying for his tuition. He has found a job and will be paying it himself – truly remarkable! Andy came to the podium and surprised Mr McDaniel with a plaque. Andy addressed the guests in English and thanked Mr. McDaniel for helping them these past years, and even that he considers him a father. Mr. McDaniel also presented for the first time a special achievement award to Juan Carlos Garden who is also a beneficiary of the college scholarship in his last year of studies and has continued helping the foundation by also teaching English to the ball boys every week.

During the prize-giving ceremony, every single participant of the tournament (whether a winner or not) was presented with RD$20,000 in prize-money, and four players who had not qualified each received RD$10,000. Alfonso Paniagua presented the winners and finalists with trophies. As an additional treat, the ball boys and players surprised Rick McDaniel with a much-deserved plaque in thanks for his commitment to the tournament and the welfare of the tennis boys. Mr. McDaniel was left speechless, and even joked that he was walking way with as many awards as the players!

Congratulations to the winners and all the players, sponsors, and supporters for a successful and wonderful McDaniel Tennis Tournament 2017! Remember, it’s never too late to donate! See the sponsorship options below.

The following photos were taken by Dariana Soriano on Saturday, March 12th at the La Romana Country Club for the tennis finals and awards ceremony: