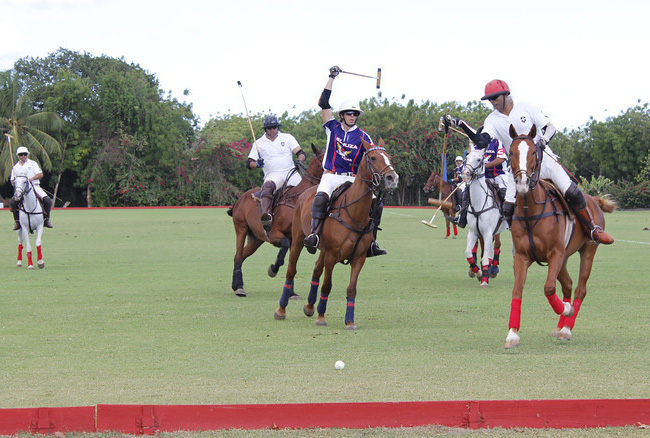 Yesterday, Tuesday April 15th the final tournament rounds of the 10th annual Casa de Campo Copa Semana Santa were played, a thrilling lead-up to the semi-finals this Thursday and the finals on Saturday.

Riding out first was El Pitirri against La Lechuza, a game that ended in victory for La Lechuza 11-9, while later SBG went up against Chamuscada and came out with the win 6-3.

We look forward to seeing you all at the semi-finals this Thursday April 17th at 3pm & 5pm, and then on Saturday April 19th for the finals at 3:30pm & 4:30pm. Remember, as is the tradition the finals will be accompanied by a deluxe spectator area, providing Moët Chandon and Belvedere bottle service by La Enoteca, as well as an exclusive VIP lounge for the players and select guests.

Here Calixto García-Vélez, Director of Polo and Equestrian for Casa de Campo and manager of sports for The Sporting Life, gives us an overview of these fast-paced and thrilling games played on Tuesday April 15th.

Another spectacular day weather wise in Casa de Campo this Easter Holiday… Sunny skies and and balmy temperatures greeted all four teams today as we awaited the outcome of the matches to decide which teams would play each other in Thursdays semi-finals.

A very aggressive and uncharacteristic foul plagued start by the La Lechuza team allowed El Pitirri to score four goals on foul shots and finish the first chukker ahead 4-3 as Lechuza had received two goals on handicap.

The next two chukkers were very even as each team had several chances to score, but great defensive plays by both backs kept the offences in check. End of third chukker 7-6 to El Pitirri.

Then in the fourth chukker it seemed that a more composed and relaxed Lechuza team allowing them to completely dominate the chukker and score three unanswered goals and swing the momentum to their side. Already in control of the match due to better team work and faster horses La Lechuza increased their lead outscoring El Pitirri 2-0 in the fifth chukker ending on a beautiful run to goal by Enrique Bonetti on his incredible mare Paula with just seconds to spare.

The last chukker was anti-climactic as Lechuza took a four goal lead into the sixth and held on two win by two 11-9.

As we have been hearing mostly of the play of Lechuza’s back Anton Tejeda the whole tournament and yes he scored today a spectacular 100 yd neck shot from the boards; we need today to mention the determined play of Enrique Bonetti who is the spark plug of this team. Bonetti could be the best mounted player in the tournament and he and his horses are the foundation of this undefeated team.

El Pitirri, who will face again La Lechuza in Thursday’s semi-final match will have to dig deep and find some offence as only three of the nine goals they scored today came from the field. I do not foresee Lechuza having another foul ridden start on Thursday, so horses and team work will decide their next match.

What is there to say about this team besides “Youth springs eternal”… The young guns from Sofias were on fire today completely dominating a very experienced Chamuscada team. Chamuscada boasts two national team players in Denis Santana and Guille Cochon, but it was Pedro Pablo Cabrera, Rafa Garcia and their two pros Heriberto Constanza and Juan Crespo who not only stole the show but performed a Broadway Play today.

With an enthusiastic crowd behind them the kids raced up and down the field with reckless abandon hitting beautiful passes to each other from every angle imaginable. Chamuscada tried everything, but they were completely dominated in every aspect of the match as SBG took an imposing 5-1 lead into the last chukker. Chamuscada managed to score two goals in the last chukker, but it was too little too late as SBG galloped off with an impressive 6-3 win.

These two teams will meet again in Thursday’s semi- final match and I am sure that Chamuscada will be cooking up a new game plan to try and slow down these “kids”.