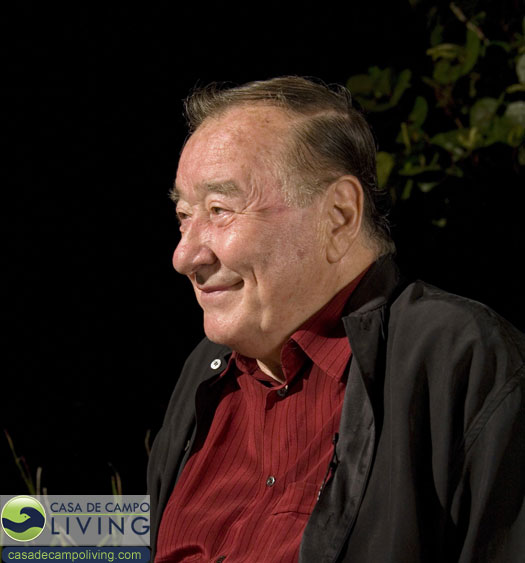 Last weekend we where fortunate enough to see an interview taking place at Minitas Beach, at the Beach Club by Le Cirque, with Sirio and Egi Maccioni. For those not in the know, Sirio Maccioni is a famed restaurateur who owns and actively manages the renowned New York staple ‘Le Cirque’ (www.lecirque.com), in addition to also incredible ‘Osteria Del Circo’, for those leaning more towards the Italian side of life.

Having enjoyed both Le Cirque and Osteria del Circo on numerous occasions, and highly recommend either one to anyone, it was with a lot of excitement when a few years back it was announced that the restaurant on Minitas Beach would soon become ‘The Beach Club by Le Cirque’. Since its opening, the Beach Club by Le Cirque has become an instant classic, providing a casual atmosphere in the day, and a ‘Caribbean Elegant’ atmosphere in the evenings, with three private bungalows available for rent with any meal. The food, exquisite, tying in tastes of Italy and France, with the predominant base of fresh local products.

So back to the interview. It was amusing to see them both being paid homage to by a young reporter who fully understood the importance of the two people he was interviewing, but perhaps had not yet experienced the mastery that these two could unleash on the palette, which after all was the point of the interview itself. You’ve not lived until you’ve tried the sopa de peche (fish soup)!

Hearing Sirio speak about his love and loathing of the restaurant industry, you would almost begin to believe that he absolutely hates the business, had it not been for his lovely wife, Egi, insisting that he actually did not only enjoy it, but loved it. Despite Sirio’s many claims of not loving the restaurant business, it is clear that he is very good at it, and has had memorable moments and encounters that many would relish to hear about, let alone experience. Want to know about Frank Sinatra? Ask Sirio about his dear friend Frank, or Francis as he called him. Bocelli? DeNiro? Guilliani? Dali? Kings, Queens, celebrities and the occasional onlookers have all been not only Sirio and Egis clients, but also their friends.

As the Maccioni interview drew to an end, the lights dimmed down and the last couple of ambiance photos taken, it had been an interesting event to watch and even more so, entertaining to listen to. Naturally, we will do our best to get and make available a copy of that interview as soon as possible. A version of the interview is also to be published in Ritmo Social in the near future, a copy of which we will try to obtain and publish here as well – so stay tuned!