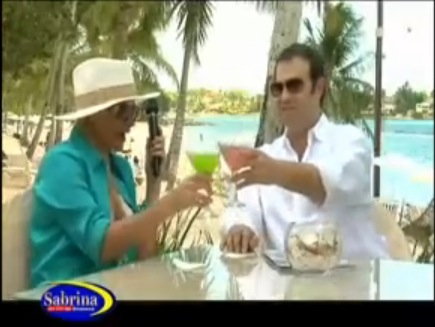 ‘Sabrina en fin de semana’ a tourist guide to the Dominican Republic has been a popular and fun source of travel information for over 20 years and is aired on various Dominican channels as well as in the United States and Europe.

During her visit to Casa de Campo, Sabrina met with a number of Casa de Campo’s celebrities (or well-know faces!); Alfonso Paniagua, Philip Silvestri and Pilar Rosario, as well as visited the new La Caña Restuarant and Lounge, the new hotel, Carmen Sol New York fashion boutique and had fun kayaking on the Chavon river and trying a little shooting at the Shooting Centre.

For the purposes of YouTube, the Casa de Campo episode has been broken down into 5 mini-shows, in this article you can watch the first two below, and if you’re eager to see Philip, you’ll find him in the second episode!

Sabrina en fin de semana – part 2
An interview with Philip Silvestri, a kayak trip on the Chavon river and shooting at the Shooting Centre