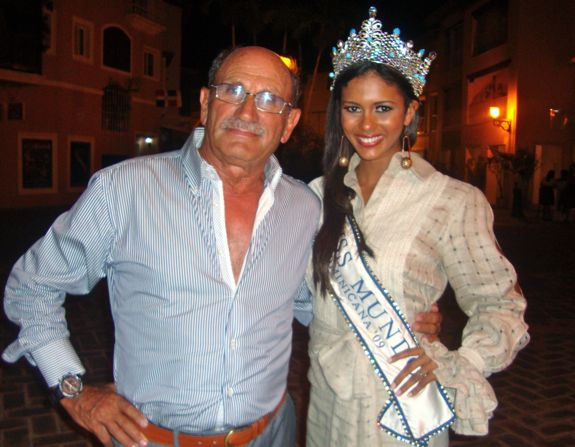 Last Tuesday the 20th of April was a time to celebrate all things Dominican – Dominican food, drinks, music, dancing and real Dominican beauty – so we were thrilled that Ana Rita Contreras, Miss Mundo Dominicana joined us for our Noche Dominicana celebration! Although we had announced that Miss Mundo Dominicana would be joining us for the event, everyone was surprised and thrilled when she actually arrived. Wearing her crown and sash, Miss Mundo Dominicana looked stunning and instantly attracted a large crowd – who wanted to stare at her in admiration, greet her and have their photo taken with her. Ana Rita handled the crowd admirably, graciously smiling and having her photo taken, it was inspiring to see how polite and nice she was to everyone – a true princess.

During the evening Ana Rita spent time greeting the guests and visiting the various Marina Casa de Campo stores, here she is in Dedon:

At some point during the evening Ana Rita agreed to an interview with Agustin from Agustin in TV, Agustin is a La Romana local and focuses much of his filming expertise on the La Romana area and is especially avid about promoting the arts. Here is a photo of Ana during her interview with Agustin: (we hope to receive a copy of this video soon, and when we do we will publish it here for you!)

To read more about Agustin and to watch one of his previous interviews filmed in Altos de Chavon, click here. The absolutly stunning dress Ana Rita was wearing for the Noche Dominicana was created and designed by Maria Elena de Chotin, who’s company is called LisMarie. In the picture below you will see Ana Rita modelling the outfit very beautifully with Eduardo Hernandez, the nephew of Maria Elena – what a coincidence!

Ana Rita was crowned Miss Mundo Dominicana in 2009 following which she competed in the Miss World 2009 beauty pageant. The Miss World contest took place last November and December, when contestants took part in events in England, Abu Dhabi and South Africa. To read exclusive letters from Ana Rita to Casa de Campo Living, taling about her Miss World experience, click here. Ana Rita is not only a beauty queen, but also an architecture graduate and she has a masters degree – very impressive! Thank you Ana Rita for joining us at the Noche Dominicana – we hope you enjoyed it! Here are our photos of Ana Rita, Miss Mundo Dominicana at the Noche Dominicana: