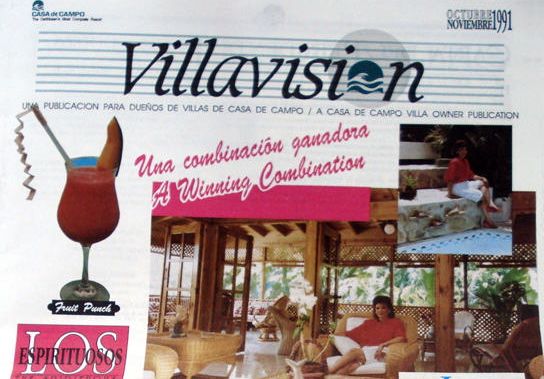 When I first arrived in Casa de Campo and Altos de Chavon in 1987, I was a typical stay-at-home mom and had three young children.I practiced all the usual domestic arts such as sewing, knitting, shopping, driving the children to school, working with the household finances, and generally taking care of the family.

But in Casa de Campo I found that some of these duties were done for me by others. So I was very happy in late 1991 when Flor Estevez suggested that I help her with the Dueños events by taking photos for the Villa Visions newspaper, and I spent two days at the Dueños ’91 event covering the Polo Match, Tennis Tournament, Gala Dinner, and Day of Sea and Sun.

The newspaper, Villa Visions, was a bi-monthly print publication for the Dueños of Casa de Campo. It contained news of what was happening in Casa de Campo, as well as a ‘Villa of the Month’ section.

Here are 2 photo graphs of a Villa Visions publication from November 1991, click on the images to enlarge:

It was a great experience to take photos of various villas and interview the owners. The villa owners who were chosen for Villa of the Month were always very excited and happy to have photos of their villas on the front page of Villa Visions -and I found it exciting to photograph several beautiful villas.

Here are photographs taken of a villa for the Villa Visions publication:

The November issue that featured my photos also included photos of the beautiful and bountiful drinks from the Caña Bar and other popular watering spots in Casa de Campo – this too was a lot of fun to research.

Below is a photograph of the cocktails taken by Carol, and one of her and Almonte, the head bar man – taken during their Cocktail ‘research’ session:

Yesterday while I was looking through my photo archives, I came across a cache of over 950 negatives from the Dueños ’91 events. These are a treasure trove of everything and everybody from that time and place. I am in the process of getting them into digital format so, hopefully, you’ll see them soon!