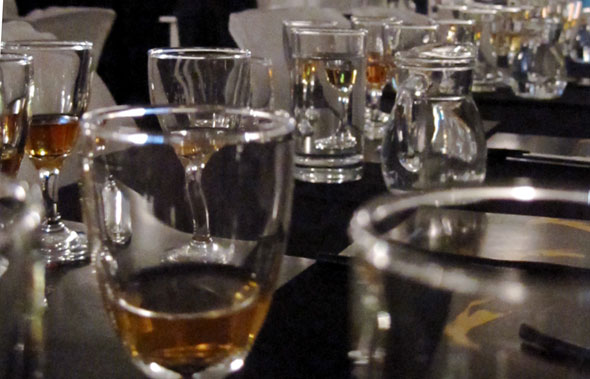 On Saturday the 13th of June ERH Marine hosted a Gentleman’s Scotch tasting event, organized by ERH Marine’s Eudaldo and Eduardo Hernandez, and sponsored by Johnnie Walker Black Label Scotch, held in ERH Marine’s owners lounge in the Casa de Campo Marina. The event was the second of a series of invitation-only events hosted by ERH Marine for their clients, friends and family, to  facilitate a sense of community and fun amongst yacht owners.

The ERH Marine owners lounge had been totally re-arranged to accommodate the event, with 2 large tables set up with place-settings all with a selection of different scotches ready for the tasting. Before the tasting began everyone mingled and had a cheeky pre-sample of the delicious Black Label Scotch on offer!  As a big fan of the occasional Black Label on the rocks, it was a pleasure to have been invited to attend and learn a little more about this wonderful beverage, its heritage and to be able to learn a few more things that would lead one to further appreciate such a wonderful beverage.

The ‘tasting’ section of the evening was more of a lecture, which was particularly interesting, especially given the fact that I am a bit of an enthusiastic scotch drinker, as were most in attendance. Quickly being lead through a brief history of Johnnie Walker and the Black Label brand, which we learned was the first global brand (take that Coca Cola!), we looked at the manufacturing process, which was really quite interesting, and we soon reached my preferred part of the evening – the tasting.

With five small glasses laid out in front of each person, we where informed that of the 30+ flavors or accents that could be found in a good blended whisky, we would be tasting only four: dried fruits, citrus, vanilla and smoke. One at a time we were lead to add water to each of the scotches so that we could actually smell the idividual accents. Apparently, without the addition of the water the whiskey has n antiseptic effect on the nostrils, so the addition of water allowed one to really appreciate each of the accents and flavors. One by one, we tried four different scotches that each best embodied the fours flavors, of which I was particular to the smoky and vanilla varieties. Others in the group seemed to prefer the fruity flavors. It was interesting to see the various reactions, likes and dislikes. Finally we reached the last glass, one containing Black Label.  After our little tasting you could really appreciate the diversity of flavors and accents in each sip.

A few additional tips we learned that night, which might be of use include:

As the tasting drew to a close, we where able to continue enjoying the splendid company, tempt our taste-buds on some delicious hour-dourves, catered by Pitri Catering, and attempt to distinguish among the 30 or so remaining flavors and accents yet to be identified. I predict we will enjoy spending many more wonderful occasions investigating what other flavors and accents we can find in a good glass of Black Label. Salud!