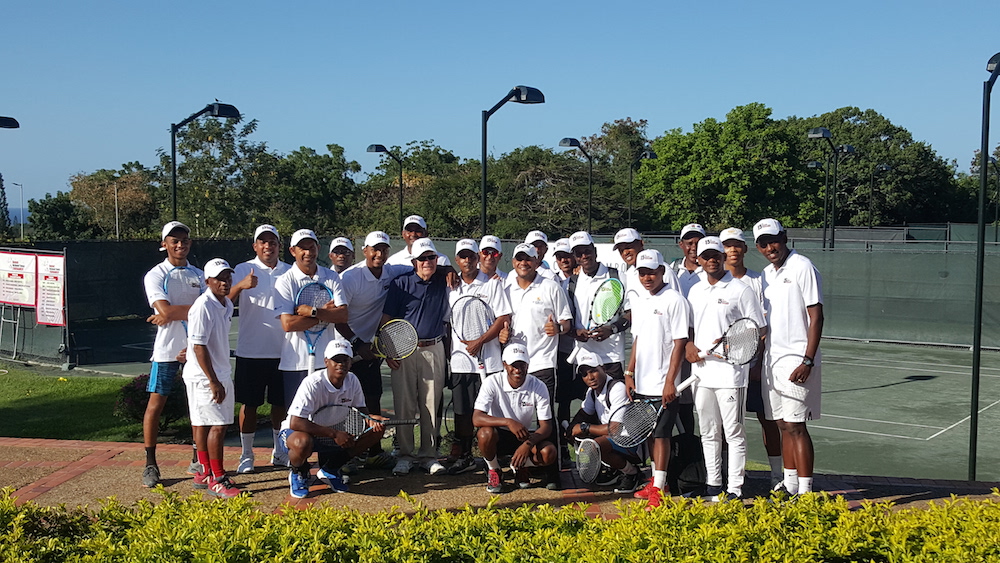 This year the annual McDaniel Tennis Teaching Pro’s Tournament is celebrating its 15th anniversary and Rick McDaniel, founder of the tournament has announced a number of special plans to celebrate in style!

This Thursday, March 5th, the 15th annual McDaniel Tennis Tournament started with the first round of pre-arranged doubles draw tournaments with 20 players from both La Romana Country Club and La Terraza. All donations this year will go, as in years past, exclusively to the Player’s Health Insurance, the Ball Boys Scholarship Fund, and College Scholarships. Following tradition during the McDaniel Family Foundation Tennis Tournament, the community members who support and sponsor the programs met for the Sponsors Appreciation Luncheon this past Wednesday, March 4th as well as got together that same afternoon for an exciting exhibition game!

The country club’s outdoor terrace was outfitted with several tables for guests where, when everybody was seated, Mr. McDaniel spoke on the excellent support of the Casa de Campo community and his sincere gratefulness. That same afternoon, the sponsors, villa owners, residents, and guests got together to witness what turned out to be an exciting doubles exhibition with Francisco Concepción with Edwin Guerrero of the La Romana Country Club, playing against Pedro Nolasco with Miguel Mercedes of the La Terrazza Tennis Club, with the latter winning the match followed by a cocktail that was set out prepared by the Casa de Campo food and drinks department.

All 4 of these players will be competing in the actual tournament in matches being played at the La Terrazza Tennis Club at the heart of the Casa de Campo resort. These tournament rounds will be taking place from today, Thursday, until Saturday, with the final scheduled to be played at the La Romana Country Club on Sunday afternoon from 4 pm followed by the award ceremony.

And so in addition to excellent tennis and raising more money than ever before… what else does the 15th edition of the annual McDaniel Tennis Teaching Pro’s Tournament has in store for us?

Every year the organizers of the annual McDaniel Tennis Teaching Pro’s Tournament host a gathering to thank their sponsors, and this year that event will be a sunset riverboat cruise catered by the La Romana Country Club on the “River Princess Boat”. Scheduled for Saturday the 7th of March, the cruise will depart from the Marina Casa de Campo at 4 pm, sail up the beautiful Chavón river and return around 5:30 pm, during the voyage participants, will enjoy music and prizes awarded with a raffle. Everyone who has donated at least US$150 per person is cordially invited to attend, however as spaces are limited you do need to RSVP to Pablo Green at [email protected] / (809) 523-5940 or (809) 523-5939.

This fun activity is open to everyone! With a fun 4-hole course designed by La Romana Country Clubs’s Director of golf, Raul Cendoya, the Putting Contest is just RD$1000 per go and will take place starting at 5 pm on Friday, March 6th. Prizes include dinner for 4 at La Romana Country Club’s Friday Night BBQ, a round of golf on the Links for 4 people including a golf cart, and gifts certificates for Café Marietta, Onno’s, Shishkabab, and Chinois. For more info contact David Farragut at ext. 8122 or [email protected]

The following pictures were taken during the different activities that took place the first two days of the 15th Annual McDaniel Tennis Tournament:

Sunday, March 8th, 4 pm – Finals at La Romana Country Club followed by the Awards Ceremony for all the players, 6 pm