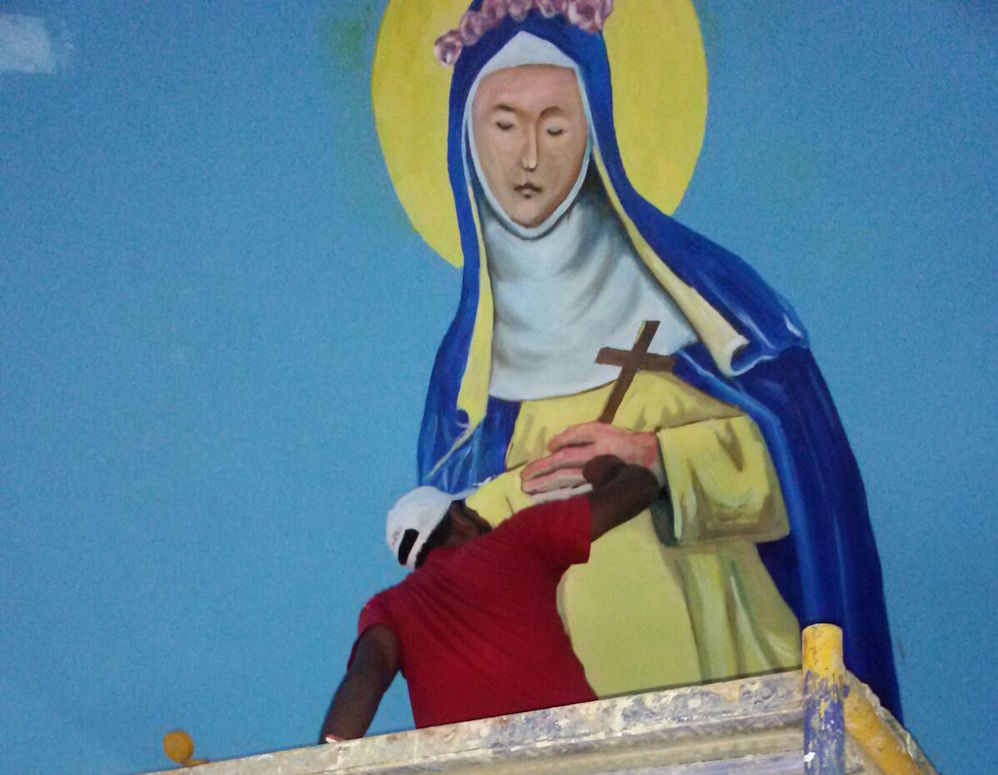 If you are part of the Casa de Campo community and even La Romana community, you have most likely heard of Argenis Lebron. Argenis is a graduate of the Altos de Chavón School of Art and Design and teaches art at the Hogar del Niño, leading the mural painting of their “Zona Verde.” He is well known for his beautiful art that pushes limits past what you are seeing. One of his latest works is the ceiling of the church Santa Rosa de Lima in La Romana.

Aregnis Lebron was born in San Cristóbal, Dominican Republic where he attended the Liceo Musical Pablo Claudio Fine Arts School and took classes under the direction of José Pelletier in San Cristóbal. In 2004, he began studying at the National School of Fine Arts in Santo Domingo where he won many awards in drawing, painting, and sculpting. In 2007, Argenis attended Altos de Chavón School of Design, graduating in Fine Arts and Illustration in 2009 and Graphic Design in 2010. That same year, he was part of the Artists in Residence program in which he presented his work in the Gallery alongside Alexander Lumsden.

Currently living in Altos de Chavón, he has his personal studio and gives private lessons to some of Casa de Campo’s community members. The Hogar del Niño mural, in their Zona Verde (Green Zone), was a project he led with eight other dominican artists, who were also graduates of Chavón. They completely transformed the exterior of the building from a white wall to a vibrant nature scene, flowing with flowers, trees, clouds and landscapes with earthly creatures.

His most recent project is the ceiling of the Santa Rosa de Lima church, which has been in the works for the past two years when Mrs. Jeannette de Lima, Mrs. Xiomara Menéndez and Mrs. Elmufdi approached him with the idea of embellishing the church. Since the church is constantly being visited by tourists thanks to the cruises that dock here in the port, they were inspired to showcase the church’s unique grounds and Dominican art. The team used a reference from one of Argenis’ hometown churches, the Nuestra Señora de la Consolación in San Cristobal, which had been painted by José Vela Zanetti – a Spanish painter and muralist who worked in Spain, the United States, and here in the Dominican Republic in 1959 under Trujillo. The ceiling is just the first part of the project; their intention is to continue with the whole church. Being such a large scale project, Argenis took on the assistance of two talented artists from La Romana, José Moreno and Carlos Abad.

An insider’s scoop is that Argenis is also working on another secret project for the new restaurant, 30Sinco in La Marina! Their opening is scheduled for this month. We look forward to seeing the results of both Argenis’ new pieces, and a big congratulations for such a grand endeavor with the Santa Rosa de Lima Church in La Romana.

The following pictures were sent by Argenis Lebron of his work on the ceiling of the Santa Rosa de Lima Church:

In this Casa de Campo Living exclusive, we’ll be the first to tell you everything you want to know about 3oSinco (pronunced Tres Cero Cinco or trace say-ro sink-o), the restaurant and nightspot at the Marina Casa de Campo which is set to open THIS DECEMBER! The establishment’s managers gave us the insider’s scoop of what we can expect and you will love all the juicy details!!! Read more.