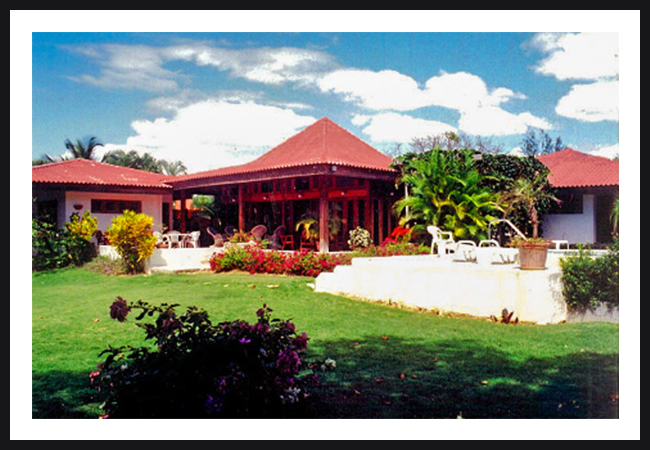 My first project after coming out of architectural school was a 300 sf villa at Cajuiles 48. The year was 1983. The owner: the late Dr. José Ernesto Antoni (my uncle), a U.S. citizen and resident of Corpus Christi, TX.

Dr. Antoni passed away 8 years ago in September. This article is in his memory, in acknowledgement of his philanthropic contributions to society and in honor of the splendid family he raised with his American wife, Martha Sims.

The villa was a 3 bedroom, 3 ½ bath home in a triangular lot that opened up to hole #11 in Teeth of the Dog. One of our most exciting recollections was that of Bill Clinton inquiring about the house when one of his swings sent the ball sideways, ending up close to our backyard.

Even though I was the first critic of the things that didn’t come out quite right, most people loved the villa as if it had some kind magic. In the winter, my uncle would put it in the rental pool and, time and time again, it was one of the most rented villas.

When the Casa de Campo marina was being built, the developers rented it for a full year to lodge some of their engineers and supervisors.

The one thing I should be proud about was the sturdiness of the structure. In the planning and construction I made doubly sure that every post was securely anchored to the foundations and every beam and rafter was equally fastened to the posts through heavy metal plates.

This paid off, as in the 23 years that my uncle owned it, it withstood 6 hurricanes and several storms with only minor structural damage.

Upon being diagnosed with a terminal illness, my uncle sold it and it and the villa was demolished by the new owner.

A Point of Reunion

During that period, my American family would come down almost every year and have a whale of a time. One of my Aunt Martha’s first self-imposed duties was to jump on a golf cart and go on a “snooping excursion” to view the latest and most spectacular villas.

A lot of their close friends, mostly from the medical community also stayed at the villa. My uncle would organize philanthropic trips to train local doctors and to perform free medical procedures for the underprivileged, not only in DR but in other Latin American countries as well.

Son of a French immigrant, Dr. Antoni graduated from Santo Domingo University and completed his medical residency as a surgeon in Montreal, New York and Chattanooga, TN – where he met his life partner Martha Sims who was a nurse at the local hospital. In the 1960’s they moved to Corpus Christi driven by the need for Spanish speaking doctors there. They since adopted Texas as their new home.

On this new anniversary of his death, Dr. Antoni is worthy of being remembered not only as an individual of integrity and social sensitivity but also as one of Casa de Campo’s most loyal clients.

Those who knew this great but humble man and his family are encouraged to comment on this post.