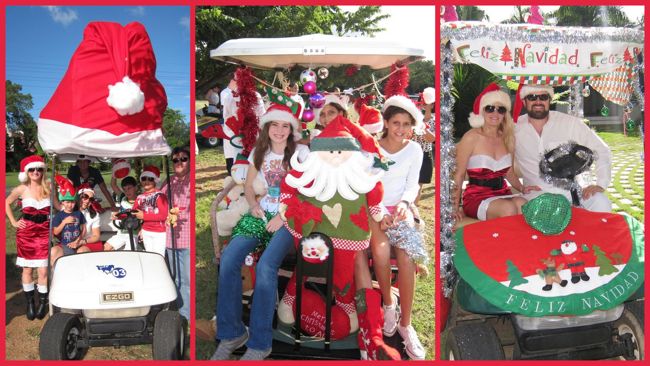 With the participation of 13 festively decorated golf carts, the 1st Holiday Golf Cart Parade was a huge success and such merry fun, that it will now become an annual Casa de Campo holiday tradition, which we hope will continue to grow ever year!

At 3pm on Saturday afternoon, Santa, a host of Santa’s merry helpers, Mrs Santa Claus, elves, a reindeer and even 2 festive doggies gathered together with Casa de Campo’s villa owners at Minitas Beach and to the tune of “Jingle Bells”, “Feliz Navidad” and “Merry Christmas” set off through Casa de Campo to Altos de Chavón.

Once the parade arrived in Altos de Chavón, a small prize-giving ceremony was celebrated, here are the winners:

Best in Parade: The Gingerbread House!

This cute Gingerbread golf cart was created by Camila and Valaria Alonzo (and their mum Patricia Proaño), with the help of their friends; Veronica Caceres, Adriana Jimenez and Frances Genao. The girls won a trail ride from the Casa de Campo Dude Ranch, donated by the Casa de Campo hotel.

Most Original: The Snowman!

This hilarious Snowman was created by Sophia Vargas with Mariana and Claudia Yanez. The girls won a dinner at La Piazzetta in Altos de Chavón, donated by the Casa de Campo hotel.

This stunning golf cart was so adorned with Christmas decorations and toys, there was barely space the girls to sit in it! This festive golf cart was created by Daniela Hernandez, Maria Jose, Clara Gil, Isabelle and Andrea Widmann and Erin Black and the girls won a 1 month membership at the La Terraza tennis club – donated by the Casa de Campo hotel.

This giant Santa’s hat took the Santoni family hours of hard work, skill and ambition to build, but was well worth it as they won a dinner at the La Cantina restaurant in Altos de Chavón.

Congratulations to everyone who took part! We look forward to seeing you all again next year!

Click on the links below for more photos and coverage of the Christmas celebrations in Altos de Chavon, Casa de Campo:

• The Bazaar Navideño (part 2): More than 100 photos of the Christmas shopping and festive fun in Altos de Chavón!