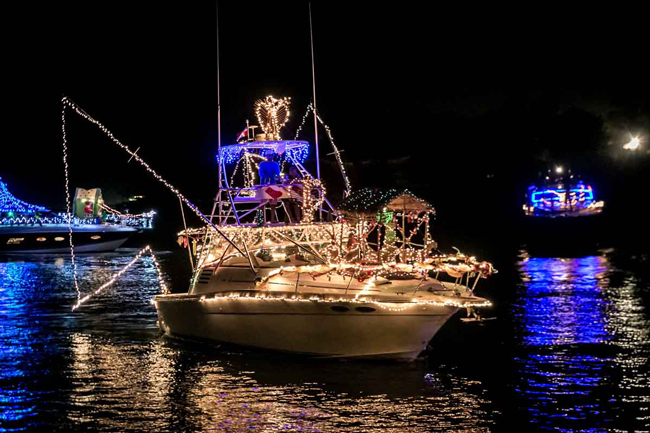 The annual occasion organised by the Marina Casa de Campo and sponsored by the IBC Shipyard and Chivas Regal 18, brought the Christmas spirit to the Marina with caroling by the children of the Hogar del Niño, as well as of course, the floating magic of the boat parade.

Those guests who arrived early, had their punctuality rewarded by a spectacular sunset, which lit the Marina Casa de Campo in a majestic orange glow. Meanwhile everyone (of age) were greeted by a lovely lady dressed in blue – the Chivas lady – offering a brindis of Chivas 18 on the rocks. A delicious way to start the beautiful evening.

Shortly after sunset, the choir of the Hogar del Niño made a special guest appearance and serenaded the gathered crowd, as the expectations and excitement built for the parade.

And then the magical moment arrived. Floating out of the darkness appeared the yachts, decked out with lights from bow to stern and glowing like Santas sleighs in the nighttime sky.

While each yacht had a glittering abundance of lights in common, each one had their own individual touches.

Other highlights included “Lucy II” elaborated in the style of a Santa’s sleigh with an inflatable life-size Santa, the “Priceless” with a tropical Christmas scene complete with a glowing palm tree, and “La Pichona” with a “charamico” nativity scene, topped with a charamico angel. (Click here to read more about Charmicos.)

We loved the “animated” turtle of “SEA E-O”

Also a big crowd pleaser was the tender’s boat, with it’s own 6 reindeer and Santa who handed out candy to the gathered crowd!

Everyone loved Santa and his helpers!

The following collection of photos were taken during the 3rd annual Christmas Boat Parade in the Marina Casa de Campo:

And even more photos sent to us by the Marina Casa de Campo: