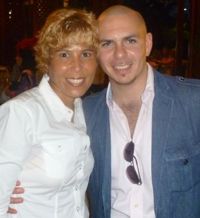 Everyone loves Casa de Campo – the people who live here, the ‘capitaleños’ who weekend here, the tourists who vacation here, and the numerous celebrities who come here to escape!

Over the last 2 years we have spotted all kinds of different celebrities here in Casa de Campo from singers to movie stars, baseball players to models and TV actors, presenters, designers, socialites and more…..

Here we re-cap all the famous people we have met, spotted, stalked and partied with:

On Friday the 11th of December, Pitbull, who’s real name is Armando Christian Pérez made an appearance at the Cafe de la Leche monthly fundraising gathering for the Hogar del Niño. The famous Cuban American rapper, singer, songwriter and producer, most well known for the song “I Know You Want Me,” stayed, posed for photos, chatted to his many admirers and shared something to eat and drink alongside all the ladies enjoying the event.

To see all our photos of Pitbull at the Cafe de la Leche in Casa de Campo, click here.

In October 2009, after playing a concert in Santo Domingo the Jonas Brothers came to Casa de Campo o realx and enjoy our world famous facilities. The 3 famous brothers stayed in a Casa de Campo villa in the Punta Aguila area and were spotted when then ventured out to enjoy a dinner in the Marina Casa de Campo at Pepperoni. When they finished their meal they were greeted by a swarm of young girls who has waited outside the restaurant to meet their idols and get autographs and photos.

In March 2010, a number of celebrities flew into Casa de Campo especially to take part in the Fundacion MIR weekend. The celebrities  – Adamari López, Daisy Oliveras and chef Michelle Bernstein took a tour of the Fundacion MIR’s schools in La Romana on the Friday, the day before the gala was held.
To read more and see more photos, click here.

Michelle Rodriguez is one of Casa de Campo’s biggest celebrity fans – over the last few years we’ve spotted her quiet a few times….We spotted her in November 2008 at Punto y Corcho, in July 2008 enjoying a massage at the Cygalle Healing spa, in April 2009 at Papa Jacks spinning the decks with some locals and also in April 2009 for the Celines Toribio wedding.

In April 2009 Celines Toribio married Giancarlo Chersich in a romantic ceremony in Casa de Campo’s beautiful Altos de Chavón. The bride arrived for the ceremony in a 1946 Plymouth Chrsyler and was lead down the aisle by her father Héctor Rafael Toribio followed by her bridesmaids, among which was Michelle Rodriguez. The wedding reception was held in a private villa in Punta Aguila.
To read more and see more photos, click here.

Alex Rodriguez is another celebrity that has been spotted on various occasions in Casa de Campo – no doubt his Dominican heritage is what draws him back here over and over again. A-Rod was here in early December 2009 for Jayzee´s 40th birthday party, at the New Years Eve at Playa Minitas in 2009 and most recently for the Salon de la Fama exaltation in Altos de Chavón when he received an award for being the youngest player to ever make 600 home runs.

In March 2009, the legendary Carlos Santana performed in the Altos de Chavón amphitheater and stayed on in Casa de Campo for a few days rest and relaxation, during which time he enjoyed a meal at the Lago Grill restaurant which overlooks the Teeth of the Dog golf course.

To read more and see more photos, click here.
To see our photos and read our coverage of the Santana concert, click here.

In January 2009, New York Yankees outfielder Johnny Damon was spotted vactioning in Casa de Campo. The lovely Cygalle Dias from the Cygalle Healing Spa at Casa de Campo, was lucky enough to meet the handsome baseball player as he was leaving the spa after a non-doubt wonderful massage!

Al Horford, an NBA player, who plays for the Atlanta Hawks was here in Casa de Campo for a short break in May 2010. Al is the nephew of Ernesto Kranwinkel, and so spent the weekend relaxing and spending time with his family.

In May 2010, the Cheerleaders were here in Casa de Campo for 1 week to shoot their swimsuit calendar, in locations all over Casa de Campo; the Dude Ranch, the Casa de Campo hotel, Palmilla aboard a Pershing yacht, the marina Casa de Campo, the Teeth of the Dog golf course and Altos de Chavón. And at the end of their stay they spent a fun day partying in Palmilla with Casa de Campo Living team on a catamaran!

Rumors have it that Micheal Jackson married Lisa Marie Presley in the Altos de Chavón church and whilst this is NOT true, the couple did stay here in a private villa in Casa de Campo in 1984, during their trip to the Dominican Republic to get married.

I spotted Cameron Diaz for the first time in Casa de Campo in February this year – relaxing at Pepperoni restaurant in the Marina Casa de Campo, at the Salon de la Fama ceremony in the Altos de Chavón amphitheater, having dinner and drinks (on the same table as yours truly – me) and then playing a little sunday golf at the La Romana Country Club driving range.

In December 2009, Beyonce and Jayzee were in Casa de Campo with a swarm of other celebrities to celebrate Jayzee´s 40th birthday. The lavish, extravagant and unusual party took place in one of Casa de Campo´s grandest villas in Barranca Oeste and was inspired by Al Pacino’s Scarface movie, and guests showed up dressed the part in a most faithful rendition of 40′s gang-style fashion: the gentlemen in elegant tuxedos and the ladies in magnificent gowns. Among the guests was P. Diddy, Lil Wayne, Kate Hudson, Alex Rodriguez, Alicia Keys, Kanye West, Oprah, Pedro Martínez, Goldie Hawn and Naomi Campbell!!

Former US President George Bush Sr. and his wife Barbara Bush stayed in Casa de Campo in February 2009 as guests of long time Casa de Campo Villa Owner and distinguished business man Gustavo Cisneros. We are sure this is not the only time Mr Bush has visited Casa de Campo – we have heard rumors that he has been here many times to enjoy golf on the Teeth of the Dog.

Eva Cavalli was here in Casa de Campo (without her husband Roberto Cavalli) in April 2010 during the Farr 40 Rolex Regatta week, during which she attended a number of VIP events at a number of Casa de Campo villas. These VIP events were held to show the distinguished athletes and boat owners of the regatta a good time – Casa de Campo style! One such event was hosted by Ritmo Platinum and Eva was the honorary guest of the evening, to view my photos of this glamourous event, click here.

Vin Diesel is another celebrity who has fallen in love with Casa de Campo – he´s been spotted various times over the last few years, relaxing and taking time out from his busy making-movies schedule. During his visit here in June 2010 he frequented Onno’s Bar in Altos de Chavon for dinner and a few drinks.

Manolo, a Columbian soap actor was here in Casa de Campo in December 2010, when he attended the Cartier Fundraiser for the Fundacion MIR and the Hogar del Niño with friends Sixto and Judy Inchaustegui. Manolo was also in Casa de Campo this Christmas, when he partied on Casa de Campo’s Playa Minitas on New Years Eve!

I am sure Casa de Campo has been visited by many many many more celebrities than those I have listed here – but unless I have a photo I have no proof! I know for a fact that Pavarotti used to holiday here, as did Richard Branson – before be purchased his own Caribbean island.