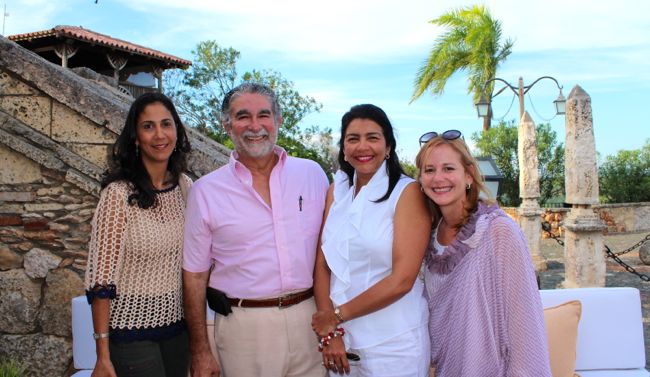 This Friday the 13th of September, the traditionally unlucky date turned out to be the perfect day to celebrate the Café de la Leche at La Cantina in Altos de Chavón!

Having been postponed from the previous Friday due to concerns about Tropical Storm Gabrielle (who never actually showed up), the delay only served to motivate even more attendees and from 5pm to late the wooden deck of La Cantina over flowed with members of the Casa de Campo community of all ages having a great time in support of a great cause!

La Cantina Latin Bistro being a hip kind of place, opted for a more modern twist on the “normal” Café de la Leche event (now a monthly tradition for more than 12 years), extending the invitation to male members of the community, adding a touch of music… and even planning an After Party – the “Local Warming Pitbull Party.”

The sun shone on the gathering in Altos de Chavón

The afternoon started tranquilo enough however, with the first guests and their milk donations arriving at 5pm and taking their seats on the wooden deck, newly redesigned with a refreshingly white color scheme. As the sun shone brightly on the occasion ladies and their partners sipped on the chilled wine sponsored by El Catador and shared conversation with friends.

As the evening progressed more and more people arrived, and the atmosphere became ever more jovial. Amid sips/gulps of wine the buffet – a delicious selection of La Cantina’s most popular dishes; tequeños, arepitas, shrimp crepes, chicken wraps and more, was quickly devoured.

And then came the moment to say goodbye to a dear friend – Thelma Santoni. Thelma, a much-loved member of the Casa de Campo community has been the Director of the Centro Diagnostico, part of the Central Romana hospital and Patronato Bénefico Oriental since it opened in August 2010 and she is now leaving us for adventures in Santiago de Chile. The bittersweet moment was marked by a speech from Xiomarita Matos, president of the Hogar del Niño as well as lots of hugs and kisses… but incredibly (largely due to Thelma’s smiley personality) there were no tears! We will miss you Thelma and we wish you the very best for the future!

“Thank you for so many good wishes, this is not goodbye, but hasta luego.”

After that the already fine line between the Café de la Leche and the After Party – the “Local Warming Pitbull Party”  continued to blur… and the evening descended into dancing late into the night! #dalechavon !

Congratulations to La Cantina Latin Bistro and Manager/owner Cecil DeHaas as well as Julia Martinez for organizing a fabulous party!

#dalechavon – the party at La Cantina was just getting going…

The following collection of photos were taken during the Café de la Leche on Friday the 13th of September 2013 at La Cantina Latin Bistro in Altos de Chavón:

Remember that next Saturday the 21st of September is the “Pitbull for the Hogar del Niño” concert at the Altos de Chavón amphitheater, so if you’ve not gotten your tickets yet – click here for details!