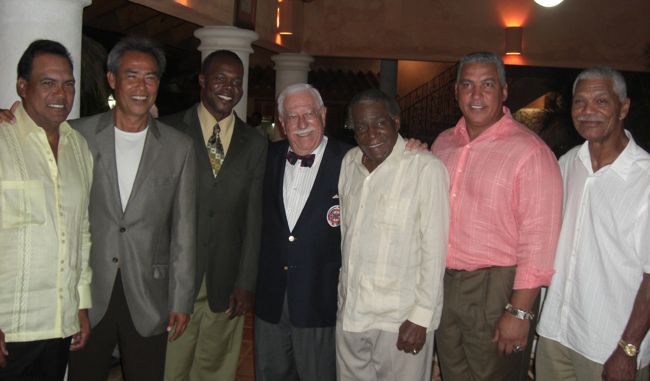 [Click here for photos and coverage of the inauguration of the Salon de la Fama del Beisbol Latino “Fan Cave” in the Marina Casa de Campo.]

The evening was hosted by Roberto Wiell, the founder of the Latino Baseball Hall of Fame, who Tommy Lasorda and the other baseball luminaries affectionately refer to as “El Rey” meaning “the King” – a great honor, which reflects the way all these Latino baseball legends feel about not only their personal inclusion in the Latino Baseball Hall of Fame, but also the actual creation of the project, which aims to celebrate the achievements of  hispanic and Caribbean Major League Baseball players – who are largely absent from the National Baseball Hall of Fame in Cooperstown, New York. Over the weekend as we interviewed and enjoyed dinner and drinks with the baseball luminaries, 2 feelings were repeatedly expressed by the “peloteros” (ball players) – those of pride and gratitude.

Following a photo-filled cocktail on the terrace, guests (who included many members of both the Casa de Campo and La Romana communities) enjoyed a buffet-style dinner catered by the Casa de Campo hotel and ate under the stars around the Wiell’s candlelit pool. Later in the evening a live band played, and the baseball players and their families were seen dancing to a typical collection of latino tunes including merengue and salsa.

The following photos were taken during this Welcome Dinner hosted at the Casa de Campo villa of Roberto Wiell:

For an overview of all the events and celebrations surrounding the “3rd Exaltations to the Salon de la Fama” – click here!